In my last Undercity game, the party was hired by the enigmatic prophetess of a small cult to escort their caravan out of the city and to a distant shrine. Their errand was hurried when a contingent of the City Guard attacked the cult’s church and burned its ancient records. Horatio, Thudok, Gadroom, and Xevius have now been swept up into the women’s haste and are now trying to leave the City of Spires without attracting any more attention. 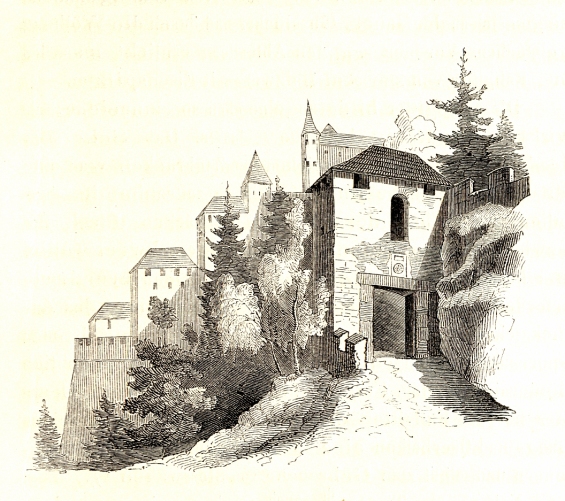 Threads: bounty on the death cult, escort the Circle

Reminder: You can find character stats, quests, etc., on the Undercity campaign’s Companion Page, and you can find links to every session on the Campaign Logs page.

The wagons set out along the street in a long train. The woman in the first wagon, paired with [d4] Thudok, directs the caravan.

How many encounter checks will it take to reach the wall? d4: 4

The trip takes longer than the party expects, and it soon becomes clear that the driver is leading them on a roundabout route through the city’s back alleys and narrow side-streets, but they eventually reach the gate without issue.

Gadroom turns toward Qadira, who rides beside him in the second wagon. “We’re drawing close to the gates. I have you have a plan to get us through the portcullis.”

[(peaceful) insane – bewilderment – relics]
“All the things you must have seen in your dark studies, and a simple portcullis seems an obstacle to you, magician?” Qadira asks, scoffing a little.

Does she have allies in place? +0: no, and… she did, but they’ve been captured

Soon, though, her confident tone turns to worry. “Wait… something isn’t right. I didn’t see it this way. Where are Akilah and Jayla? They should be waiting for us.” As she speaks, the gatehouse doors open and a man in a captain’s uniforms steps out to speak with them.

“Ah, if it isn’t the witch, Qadira!” he laughs, moving immediately to the second wagon. “The Watch received word from Valencia that you may be attempting to leave our fair city tonight.”

[inquisitive – interest – retainers]
She glances at the men standing beside the doors and the other faces that she is sure are staring out the arrow slits in the gatehouse. “Quite the company for so small a gate–and a captain to see us off, as well. What do you want, Captain?”

[inquisitive – petition – allies]
“We are gate sentries, of course. We couldn’t possibly let one pass without asking why they are leaving in such a hurry, especially at this time of night.”

Are men surrounding them? +2: no + event
Event: move toward thread – control/extravangance

The captain waves his men back a step as he personally step closer to the wagon. “Valencia sent word that you might be leaving tonight, so I…volunteered…to lead this gate’s watch myself. There are rumors about you lot, about your good fortune. Now, it looks like you’re setting up to abandoned our fair City for good. I can’t say the Goddess’ll be sorry to see you cult-witches off, but I–a patriot and lover of this most grand City–couldn’t possibly let witches leave with so much of the Red Lady’s wealth, now could I?”

Will she submit to bribe him? +4: yes + event
Event: NPC action (the Circle) – triumph/portals

Qadira sighs, but reaches a hand into the sleeve of her robes. Just as she is about to extract her hand, the great portcullis begins to groan and shudder as it creaks upward. Women in chain armor and the City’s tabards stream out of the gate houses, wounded but alive.

“Give none of the Star’s blessing to that curr, prophetess!” the first of the shouts. “His men caught us by surprise, but we turned it around in time. Get yourselves out of the City, and we’ll follow when he’s bound up tight.” So saying, the women cast off their tabards and drag the last of the watchmen into the gate house.

[knowing – account – antagonist]
“Wait, sister,” Qadira says before the soldier drags the corrupt captain away. “This man is doing a…fine…job at this gate. I think he deserves some consideration for his tireless and selfless defense of the City’s interests.” She pulls a platinum piece from her sleeves and hands it down to the man, who takes it with some trepidation. Their hands touch for a long moment as she passes the coin over. Leaning close, she says, “This could have been an embarrassing incident all around, couldn’t it? Perhaps… perhaps our passing will go unreported this night.”

The man can only nod as the sisters drag him back into the gatehouse with his men.

Smiling, Qadira commands the first wagon to make haste out of the City.

“So, where are we going?” Gadroom asks the prophetess after they have travelled several hours from the City.

“East,” she says, “to an ancient and most holy place for the Circle. The Bridge of Light. It is said to be the place where the Star first whispered to her ear, many generations ago.”

“Yes. Several weeks of travel lie before us, at least. Perhaps a month, if the path is rough.”

Gadroom frowns. “Perhaps we should have brought Guldor and his company after all.”

“Fairuza told me of your company’s mercenary friends. You saw the reaction we received from the city. We cannot trust those who are native worshippers of the Lady. The Star and her worshippers are anathema to the Red Goddess.”

Note: I will be rolling 2d6 for each hex I enter along this trip. A roll of 1 on the first die will mean that I have a road encounter, per the d30 Sandbox companion. A roll of 1-2 on the second die will mean that I have found a settlement or a feature, which will also be added per the Companion, but may or may not provide any additional adventure.

The party travels northwest for eighteen miles, passing quickly through the fertile river valley that surrounds the City of Spires and then climbing into the dry, rocky desert that separates the City from the rest of Civilization. They push the animals and the travelers hard that first day, desperate to put distance between them and the City. Camp the first night is [politely/ancient] dominated by ancient songs of praise and worship to the Star that guides the Circle. The men of the party stand back and watch as Qadira leads her follows in their rites, although none are tempted–or invited–to join in.

The party turns and travels due north today, planning on putting twelve miles of the harsh terrain behind them. However, they haven’t traveled more than a few hours before one of the outrider catches sight of an odd hillock in the distance; the party rides out to investigate and discovers signs of an ancient shrine, now almost completely covered in sand from the shifting dunes.

They returns to the caravan to ask Qadira about the shrine.

[knowing – history – previous scene]
The prophetess seems less surprised than the others. “This must be the place known as the [d30] Enchanted Dome,” she says, interested but not overly so. “I had always suspected that it was myth, or legend now lost to time, at least. Its history is [curiously/macabre] one of darkness and pain. We’ll pass it by for now.”

The caravan moves past the mound, although Gadroom notes its location in his journal so they can return to it when time is less pressing.

The second half of the day’s travel is uneventful, and camp that night is [miserably/young] interminable, interrupted constantly by the yapping of coyote pups and other animals out in the darkness.

The party heads north-east, trying to stick close enough to the great sea that they don’t lose their way in the desert, but far enough away that they will avoid any unfortunately-timed patrols. Their efforts are a success for today, at least–they see no evidence of either travelers or habitations.

Camp that night is [kookily/lacking] frustrating to the party, as the caravan’s cook forgot to prepare dinner and they all went without food until late in the first night watch. 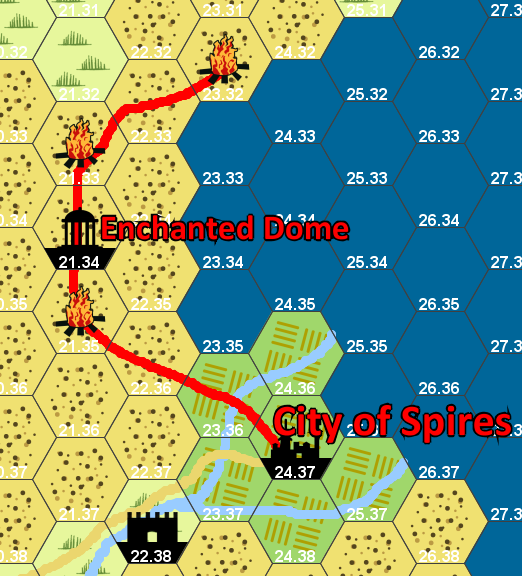 Threads: bounty on the death cult, escort the Circle

This is a solo game using Kabuki Kaiser’s Ruins of the Undercity dungeon generator. RotU was not used this session, as the party is adventuring above ground (although the dungeon will still be there when they get back, low on coin and desperate).

I am using Labyrinth Lord and pieces of its Advanced Edition Companion as the rule system for this game (free, no-art versions are available on DTRPG, too). I am using Mythic Game Master Emulator and its Variations I and–most importantly–Variations II for my solo GM oracle.