Pacing change: My goal for this Undercity post is to keep it moving much faster; this is a delve-style solo game, so I’m going to try leaving a lot of the action summarized or unstated. I’ll leave the greater narrative focus for above-ground adventures that use Mythic. I do aim to use Mythic during the delve to help create an ongoing story/mythos that I can explore in overworld adventures, as well.

Rules change: After reading LL’s magic-user creation rules, I’ve decided to allow Gadroom to select his starting 3 spells instead of rolling for them randomly. Instead of the useless Light, Read Languages, and Protection from Evil, he now knows Sleep, Read Magic, and Invisibility (2nd level). These should prove much more handy going forward.

Following the party’s successful (though not profitable) first delve into the sewers beneath the City of Spires, they decided to return to the surface and spend some of their remaining coin hiring additional men-at-arms and recuperating from their wounds.

Without recovering any treasure in the ruins, they are unable to upgrade any equipment and decide to avoid spending the time and risk exploring the City to find new goods.

Reminder: You can view all my solo sessions from the Campaign Logs page.

After returning to the inn to rest, the party decides to seek out new men of violence to aid them in their exploration of the ruins.

Gadroom pays 16 gp for four days’ room and board for the party and an additional 4 gp to hire the men-at-arms.

With four men each demanding a 1/4 share of the treasure, the party will be splitting the treasure five ways.

Gadroom asks the men at arms to take positions at the front of the party, making a shield wall.

Guldor, the leader of the small company, refuses, saying that they were hired as soldiers, not fodder. Gadroom concedes and the party takes up marching order with the men-at-arms dispersed throughout the party.

The party explores a southern corridor until it dead ends. They decide against spending the time searching for secret doors.

The stink of rotting garbage and sewage permeate the air in the tunnels even before the party reaches the room. Sludge drips to the floor from a half-dozen small channels set up near the ceiling and slowly drains to a culvert in the floor.

When the party is satisfied that there is no monster, they spend a turn checking the chamber for traps before entering.

The party’s diligent search pays off. Candim, the new man-at-arms, notices a tripwire slung down low, nearly invisible in the poor light. Following it up the wall to its source, the party finds a large javelin hidden in the ceiling, waiting to fall on their heads.

They make a note of the trap but leave it intact. It will be easy enough to avoid and could come in handy if pursued.

The corridor beyond is dank and moldy, but they’re grateful for the change after the stink of the chamber. The corridor is short and deposits them beside a moldy wooden door.

The party checks the door for traps.

They find nothing, and Xevius pushes the door open as the party stands back a half-dozen feet. It swings open to reveal another corridor stretching into the darkness.

A young woman (a virgin, perhaps) in ivory-white robes is being lifted up on a litter on the shoulders of four stooping men. The sun and moon are both above, watching.

The party decides to rest here and examine the mosaics without moving further.

Gadroom lights a new torch and they continue south.

The mosaics give way to paintings showing the progression of the same mysterious ritual, although the symbolic actions of the participants means little to the party.

As Guldor’s pole taps hard against an otherwise unmarked stone, the corridor suddenly shines with a brilliant light as ancient runes become visible on the walls. A torrent of energy pours out into the space in front of the party, but it soon wanes.

A soft light spills out around the corner ahead. They cross round it to see a single lantern handing in the middle of the narrow stretch of curved tunnel. Some dark liquid pools in the cracks between the rough stones.

The party steps around the standing water.

Quick aside: man, those are bad HD rolls for me.

The party creeps toward a small chamber a few dozen feet ahead.

Do they hear anything? +2: yes (I’ll rule that the party cannot be surprised, since they’re expecting enemies)

There is a faint rustling sound from the room ahead. The party grasps their weapons and charges forward. Three rotting corpses are in the room, laid out on three tables of thin wood. Manacles and chains lie around them. Something dark happened here, but the party has no time to consider it.

Smashing fast, the front row of fighters hit the two closest zombies before the party pulls back into the hallway to hide behind Horatio and Thudok’s shield wall.

The zombies, risen now, smash into the wall. Horatio tries to turn them, but the profane things pay him no heed.

For several rounds, they trade blows back and forth. A zombie falls, but Horatio takes heavy damage. He falls back and trades place with Guldor, the man-at-arms. While Guldor fights, Horatio heals himself with a Cure Light Wounds.

Eventually, the last zombie falls and the party stands victorious–wounded, but no dead.

The party searches the room for treasure, but they find nothing of any worth. 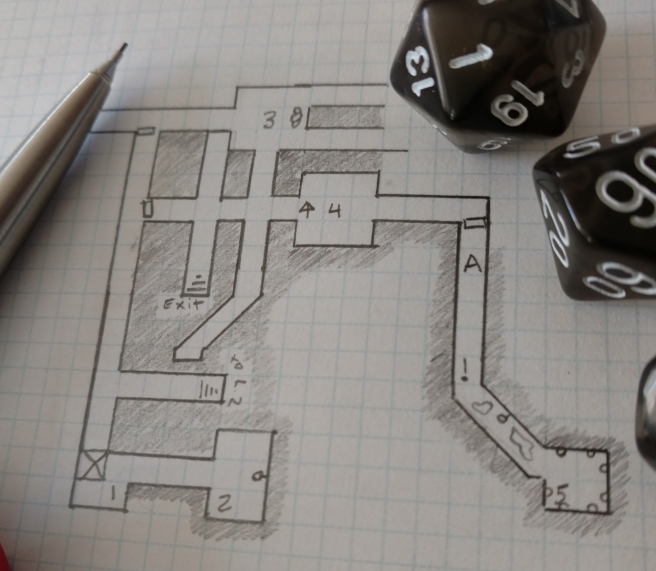 I’m going to end this session here, because this post is getting too long (1200 words?!?). We haven’t explored a lot, but we’ve done a fair bit of setting up. I’ll continue in media res for the next session, with the party continuing forward from here for a bit, anyway.

I’ve been having crummy rolls so far in the dungeon, but I guess it makes for a slightly more realistic delve. The odds of there being any significant treasure this close to an entrance is slim–hopefully my party’s remaining gold can survive until they find their first big haul.

Regarding post style: how is this for content volume? I intended to make this a little faster moving, but there’s just so many parts that it got fairly stretched. Is this too long? I want to avoid making it look just like creative writing exercises, but I also don’t want to bog everyone down in details or just describe a series of rolls. Let me know!

2 thoughts on “The Undercity: Session 2”