Last time in this campaign, Alindor, the main PC, was hired by a young woman to look for her father in the Underdwell (renamed), the labyrinthine sprawl beneath the City of Spires. Unfortunately, the girl herself was kidnapped before they had a chance to descend, and the only clue pointed to the Iron Hand, a local criminal game of some power.

Alindor is now racing towards the inn where he first met the girl, and the knight who was going to lead him to the entrance to the sewers.

Does he reach the inn without incident? +0: yes, but…

The streets are already bustling this early in the morning, but no one notices him as he passes. However, when he arrives the knight is nowhere to be found.

Reminder: You can find all of my solo games sorted on my Campaign Log page.

Does the innkeeper know where he went? +0: yes
[Tarot] Where? Page of Pentacles 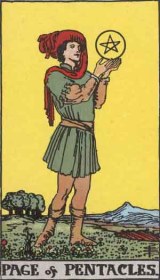 The innkeeper explains that the knight mentioned something about spending a few coins before he left the inn.

Does he have any idea where Alindor can find him? -3: yes

There aren’t too many places where a foreigner can easily spend money in the City, so there are only a handful of markets where he could have gone. The innkeeper gives Alindor directions to the nearest bazaar.

Is the knight there? +2: yes, but…
What? Travel/Defense

There’s a small ruckus going on. The knight is arguing with a local merchant over the price of a suit of chain armor. Alindor notices a pair of local guards eyeing the knight as he shouts with the merchant.

The two men calm down enough admit that they were making a big deal out of nothing. The guards eventually turn away, other matters drawing their attention.

The knight was a moved by the young woman’s story as Alindor was. When he hears of her disappearance, his anger is kindled even further. Even more than that, he knows of a few stout men who may be willing to join them in the darkness.

The men look stout enough, but none are warriors by trade–Nolgar’s military service was limited to a term as a levied soldier, quickly abandoned. Still, they are more than Alindor had hoped for. The knight–named Kronen–at least knew his way around a heavy blade.

The men agree to journey with us, although Sturmat is clearly uncomfortable with the idea of descending into the sewers. Alindor assures him that they’ll do their best to avoid fighting.

Do they need to pay Kronen’s friends? +4: yes

Each demands 2 gold pieces for the day’s labor. Low on coin but without much choice, Alindor agrees to the price.

Without wanting to waste any more time, Kronen leads them to the entrance to the Underdwell.

He guides the party into a neglected ancestor worship shrine used by some small cult of foreign residents of the City. It is empty now. He takes them down into the cramped tombs below the sanctuary.

It grows dark. Sturmat lights a torch, but he insists that someone else lead the way. Kronen and Nolgar step forward.

They move deeper into the tombs. The walls are bare earth, supported by water-eaten posts. At the end of the long corridor, the floor falls away, revealing a pit and a stone floor some 10′ below.

Kronen points out a rope tied around one of the posts near the hole. “That’s how we got down,” he says. He uncoils it and tosses it into the pit. It’s time to begin.

The find themselves at the end of a narrow corridor. The flickering torch just reveals a four way intersection ahead. Nolgar and Helmex lead, with Kronen and Sturmat, carrying the torch, right behind.

At the intersection, they decide to move south… 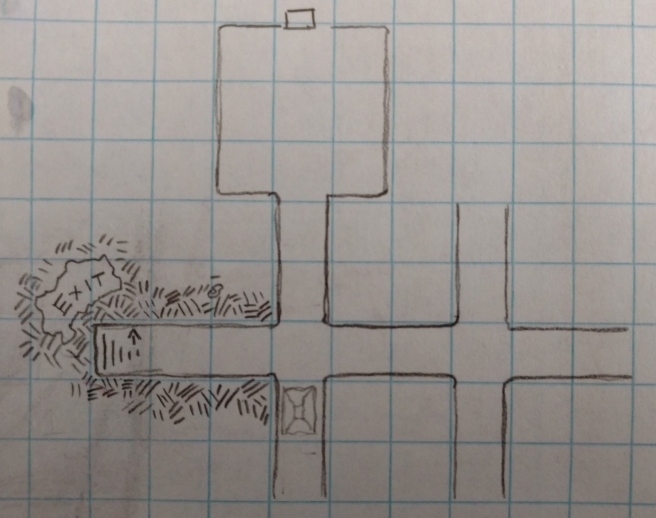 And the floor falls out beneath them as a horde of gibbering, malformed beasts come howling out of the darkness. Nolgar, falling backwards as quickly as he can, catches the side of the wall and slides to the bottom of the spiked pit [2 damage] while Helmex lands deftly below [2 damage].

Unfortunately, the rest of the part is caught completely flat footed, and the lunatic troglodytes attacking them quickly snare several of the party with their nets.

Five rounds pass as the jinxkin shoot stinging darts their way and prod at the captured adventurers with the half-spears.

Helmex and Nolgar, trapped in the bottom of the pit, die quickly. Sturmat follows soon after.

Ullar manages to help pry the net from Kronen, and the pair of them and Alindor attempt to retreat back around the corner, praying that the jinxkin leave them be.

Unfortunately, they follow, screaming right on their heels. The party can’t retreat up the narrow rope they used to descend, so they turn and fight, hoping the bend in the corridor will protect them from the stinging darts.

It makes no difference. (Dozens of failed rolls) Alindor uses his magic to strengthen Kronen, but the old knight falls as a spear pierces his side. Alindor falls soon after, and then Ullar, falls alone, screaming, as the jinxkin drag him into the dark.

Dang. So, that was fast. I bought Ruins of the Undercity as my generator (and its sequel, 1001 Pagodas) to try it out after reading cool things on Dan’s Gaming Blog. It’s as brutal as he says. I died on the first encounter, generated by the first roll, while rolling only three hits in 9 rounds against enemies with [12] AC.

My next party will be generated with less pre-story. I will aim to use Mythic to fill in the areas between delves, etc.; essentially I will back create the story as they go, putting in more effort as they “earn” it by surviving longer.